Skip to content
A human can not get any friend more faithful than a DOG. They have been bread since ages to make them more friendly and more useful to humans.
DOGS are well known for their capabilities of extra-ordinary smell. Their property of smelling have been used in various ways by the humans since long time. This has been used for fetching, security and threat detection purposes.
But did you know?
Not only can dogs smell what is present at a distance but can also smell what is present inside our body!!
DOGS can DETECT DISEASES in our body!! Sometimes even before they occur!!
Over course of this friendly relation with our canine friends, we have discovered that dogs react differently when their owners are about to have a disease attack.
Interesting, isn’t it !!

Diseases that can be detected by Dogs

Cancers that can be detected by Dogs-

WHAT do DOGS DETECT ?

These are called as VOLATILE compounds.

Since dogs have an amazing capacity of smell, they detect these volatile substances.

Some examples of the diseases are-

Dogs have been able to detect other important complications such as HYPOGLYCEMIA, SEIZURES even before onset of their symptoms. The exact reason of this is still unknown. But this has helped owners to save their lives.

USES OF DETECTION SUCH VOLATILE SUBSTABNCES-

These changes in biogenic volatile organic compound concentrations can be used to mirror pathological processes in the whole body or blood concentrations of drugs (e.g. propofol) in clinical settings—even during artificial ventilation or during surgery.

Noninvasive detection and therapeutic monitoring of oxidative stress would be highly desirable in autoimmunological, neurological, inflammatory diseases and cancer, but also during surgery and in intensive care units.

HOW ACCURATE ARE DOGS IN DETECTING THESE VOLATILE SUBSTANCES?

LUNG CANCER- sensitivity of canine scent detection compared to biopsy-confirmed conventional diagnosis ranged from 71% to 99% and overall specificity 93% to 99%. Lung cancer detection was independent from COPD and the presence of tobacco smoke and food odours.

BREAST CANCER- sensitivity was 88% and specificity 98%

Acoording to questionare based study, when the dog owners were asked how many times have the dog helped them in detecting their hypoglycemic incidences, the results were highly supportive-

MELANOMA- In an accidental finding, a dog detected the presence of cancer cells on skin much before it became a symptom. The patient had no symptom or spots on skin but thorough histopathological examination in this individual then confirmed melanoma in a fraction of the cells.

OVARIAN CANCER –  Double-blind tests showed 100% sensitivity and 97.5% specificity. Moreover, the odor of ovarian carcinomas seems to differ from those of other gynecological malignances such cervical, endometrial, and vulvar carcinomas.

SEIZURES- Findings suggest some dogs have innate ability to alert and/or respond to seizures. Suggests a trend in type of seizure/auras a dog may alert to. Success of these dogs depends largely on the handler’s awareness and response to the dog’s alerting behavior.

MALARIA- Dog distinguished between sock samples from malaria-infected and uninfected school children, with a sensitivity of 70% to73% and specificity of 90% to 91%.

All of these suggest that the results obtained from using dogs as detection tool for diseases might be variable in various diseases but are definitely more than a luck by chance findings (14%).

HOW ARE THEY TRAINED? 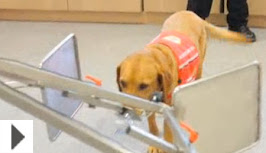 A video by CAMBRIDGE UNIVERSITY explains this process how dogs are trained to detect hypoglycemia.

Ordinary household dogs with only basic behavioral “puppy training” can be  trained to accurately distinguish breath samples of lung and breast cancer patients from those of controls, in a matter of weeks.

A smaller proportion showed behavioral responses suggestive of fear, including trembling (7.2%), running away from the owner (5.1%), and/or hyperventilating (2.2%).

It has been seen in some patient’s interview that, these reactions changed as the bond between the owner and pet strengthened over time.

The sex, age, breed status, and length of pet ownership were found to be  unrelated to response likelihood of disease detection.

This is non invasive, portable method requiring no laboratory set-up for disease detection.

Dogs in some prospectes resemble humans to some or other extent. Just like humans they suffer from mood swings, depression, health issues and react according to their surrounding, up bringing and bond with their owners.

They are subject to boredom, fatigue, and an incentive to gain reward for minimum effort much like the humans they work with.

Hence, researchers, trainers, and practitioners of canine-based diagnostics should recognize these personality aspects of dogs and develop specific controls and guidelines to assure that the dogs are working to the best of their olfaction abilities.

Some people tend have fear of dogs. This will obviously come in the way when direct contact comes into picture.

Also dogs also require to be looked after, trained and regularly check for health issues. All of this is a time and weath consuming process.

ORGANISATIONS WORKING TOWARDS THIS-

There have been some organisations working towards this novel cause. These are experts in training dogs and providing them to patients who require such dogs to save their lives.

MEDICAL DETECTION DOGS has been working on this and providing people with trained sniffer dogs who can help the paients from life threatning incidences.

ASSISTANCE DOGS INTERNATIONAL has been working through its various centres around the globe in trainein gand providing the patients such trianed sniffer dogs.

Well, not much research on this topic has been done so far, but it is assumed by expert that just like other diseases, corona patients also expel certain volatile compounds in the breath which can be detected by strong nose of a dog.

Few studies conducted also support this theory. In a sudy, it was found that dogs were able to discriminate between samples of infected and non-infected individuals with average diagnostic sensitivity of 82.63% and specificity of 96.35%. The dogs achieved an overall average detection rate of 94%.

Points to keep in mind while using a MASK-

Canine olfaction could become a preferred methodology for disease diagnosis in emergency situations (infection epidemics) and in places where high-tech instrument-based analysis is unavailable. Also these can be deplyed at locations requiring vast screening such as air-ports, railways and similar.

Connect with us on social media platforms!

By Majestic MedicoOctober 5, 2020covid-19, dogsLeave a Comment on Can DOGS detect DISEASES in humans? Which diseases can they detect?